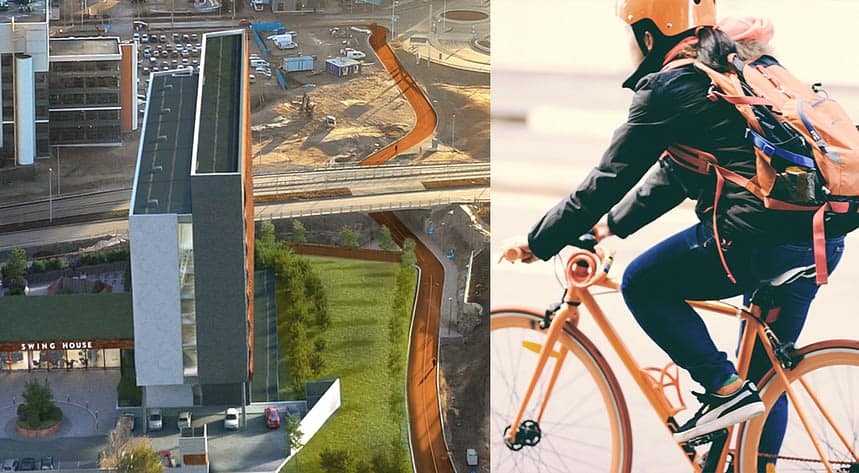 Swing House is a new development in Keilaniemi that is built focusing on the wellbeing of both the environment and the wellbeing of its users. Cyclists, for example, have their own entrance.

According to annual statistics from the City of Espoo, the number of active cyclists increased substantially in 2020: at the beginning of the coronavirus pandemic, the growth was rapid, first at 20–40%, increasing to 80% in May. Towards the end of the year – between September and November – there were 40–80% more cyclists on the roads than normal, depending on the day. The popularity of cycling to work is expected to increase further, as, from the beginning of this year, employers may provide bicycles as a tax-free fringe benefit up to the value of EUR 1,200. This incentive is part of the Government’s campaign to reduce emissions from transport and to increase cycling by 30% by 2030.

In the future, there will be increasing focus on sustainable modes of mobility in Keilaniemi: public transport, walking and cycling. This aspect had been a consideration in Swing House, where cyclists will have their own separate entrance: a ramp will lead directly from the cycling lane to the heated bicycle park, from where there is a quick access to shower facilities and the offices.

“Safe access to the property, a bicycle park complete with charger points for e-bikes and well-appointed shower and changing rooms in the basement have been designed for all commuter cyclists. Sustainable commuting is also supported by the proximity of the Jokeri light rail and metro, car sharing and e-charging stations,” says Antti Pyötsiä, project manager for the developer Elo.

Read more about the facilities at Swing House.
Looking for business premises? Let us help you to find the right space for your company!

Elo Mutual Pension Insurance Company is one of Finland’s largest property owners and lessors. We have about 700,000 m² of office, commercial and storage space in the Helsinki region and in growth centres.

This website uses cookies so that we can provide you with the best user experience possible. Cookie information is stored in your browser and performs functions such as recognising you when you return to our website and helping our team to understand which sections of the website you find most interesting and useful.

Strictly Necessary Cookie should be enabled at all times so that we can save your preferences for cookie settings.

If you disable this cookie, we will not be able to save your preferences. This means that every time you visit this website you will need to enable or disable cookies again.

This website uses Google Analytics to collect anonymous information such as the number of visitors to the site, and the most popular pages.

Data gathered on the site’s use allows us to develop our services and target specific content that interests our individual customers.

Please enable Strictly Necessary Cookies first so that we can save your preferences!